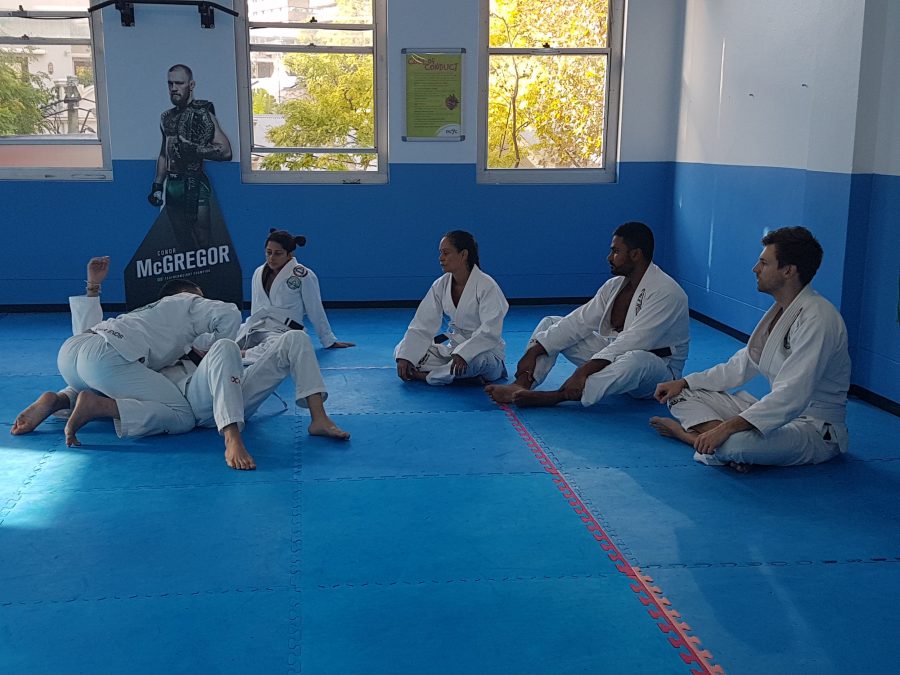 On Sunday, Conor McGregor will fight Khabib Nurmagomedov for the undisputed lightweight crown, and I’m quaking in my boots!

It’s for the belt, but the most important factor in this fight is legacy.

The Irishman is brash, and cocky, and loves to flaunt what he’s got. A true showman, who is every bit entertaining as talkative. And with the right amount of drama and taunting, he’s managed to conjure up a mega story, and his most difficult challenge to date.

In Khabib we have an opponent that wrestled bears as a kid. Literally. He’s made ragdolls of great fighters, and clearly possesses something special compared to other grapplers like him.

Sure he has holes in his game. The real estate agent did block some takedowns. But there’s no doubt this man is a formidale opponent that would strike fear deep in the guts.

It’s a few days out from one of the most intriguing and anticipated UFC fights of all time, and we’re all abuzz with excitement, and questions, and opinions. Fan. Hater. Whatever you are, on the eve of another blockbuster, you cannot deny the brilliance of Conor McGregor.

So what makes this guy special, and how can we learn from him?

Find the Biggest Challenge and Bounce it’s Head off the Canvas.

Nate Diaz 3 would have been easier. A tune up fight with a lesser wrestler like Dos Anjos maybe? Something. Not Khabib after two years away. Anything but the most dominant wrestler in the game. Nope.

McGregor talks a big game, but he acts on what he says too. He doesn’t beat around the bush. This is a guy who finds the most difficult challenge and goes right after it.

You have to be careful with this strategy. You can run into harsh terrain very quickly. He felt it with the weight and durability of Nate Diaz in their first encounter and he was ill prepared to deal with that kind of battle.

One loss to a Diaz Brother is something we could all deal with. Two consecutive defeats to the Stockton killer and the McGregor legacy would have definitely been tarnished.

But with higher stakes come greater rewards. McGregor succeeded, battled through the same adversity, and prevailed on the second attempt.

He could easily be mauled the way all of Khabib’s other opponents have been. Khabib could well isolate an arm and take it with him to Dagestan.

And at the same time, if he has his way yet again and KO’s the man everyone says is in possession of his kryptonite, the world will go crazy and bow down to him as the greatest fighter in combat sports history, bar none.

You don’t go into a situation like this with reckless abandon. It’s only with an extreme work ethic, controlled enthusiasm, self belief, and a thirst for battle that Conor can be so confident of his skills and assume the biggest challenges that face him.

And only with these tools can he capitalise on the opportunities he sees and shoot for the stars as he has done since the beginning.

Humble in Victory and in Defeat

Conor isn’t invincible. He’s been caught numerous times in his career, all of those by submission.

Against Nate and after talking a big game, he gassed hard and tapped in front of millions. He took the loss, contemplated what went wrong, and made the changes for it never to happen again. There was no freak out. No change of camps, or dummy spits. He didn’t doubt, he simply nudged, made some adjustments, and he continued moving along the path.

In order to change something you must first acknowledge that there is an issue. And to look for issues, you need to be humble, and willing to act. You can also be humble without becoming self deprecating.

You can mess things up, be proven wrong, and still think you’re brilliant. In fact, in the fight game you need to think you’re the best. Or else you die. Or get choked. Or mauled by a bear mauling Russian. That’s why be humble, but not timid, or weak. Off the mats too. Be aware always, on the lookout for opportunities, and ready to pounce whenever they come about. Confident, effective, and yet always evolving and learning and growing. Conor McGregor is an example of how this is done.

Love What You Do & Always Have Fun.

He’s erratic. He goes crazy. And Conor McGregor just doesn’t care. With so much money, and fame, and fortune at his disposal, you’d think someone in his shoes would jet off on a yacht with his entourage strutting Dolce & Gabbana and sipping cocktails by the Mediterranean beaches for the rest of his days.

That’s if you didn’t enjoy having people try to separate your limbs and strangle you cold. The thing is you get to hit them in the head and KO them stiff in return. Sure throwing steel trolleys at buses filled with people is silly business. But you’ve seen McGregor at the weigh-ins. You hear him in the conferences. The man loves this stuff. He thrives in the pressure of a fight, he loves combat, it’s his life’s work, and he’s one of the greats doing it.

The whole time he’s cracking jokes, looking good, and having fun doing it. We could all do with a little less wondering and worrying about the future, working with the now, and enjoying the good moments and the bad, and this is one page we can take out of the McGregor playbook.

Love him or hate him, you will watch him.

On Sunday I will be holding my breath in anticipation and squirming in excitement to watch two supreme combat athletes go head to head in a clash for the ages. Grappling vs Striking. Russia vs Ireland. However you want to look at it, may the best man win, and may we all learn and appreciate the Notorious Conor McGregor.