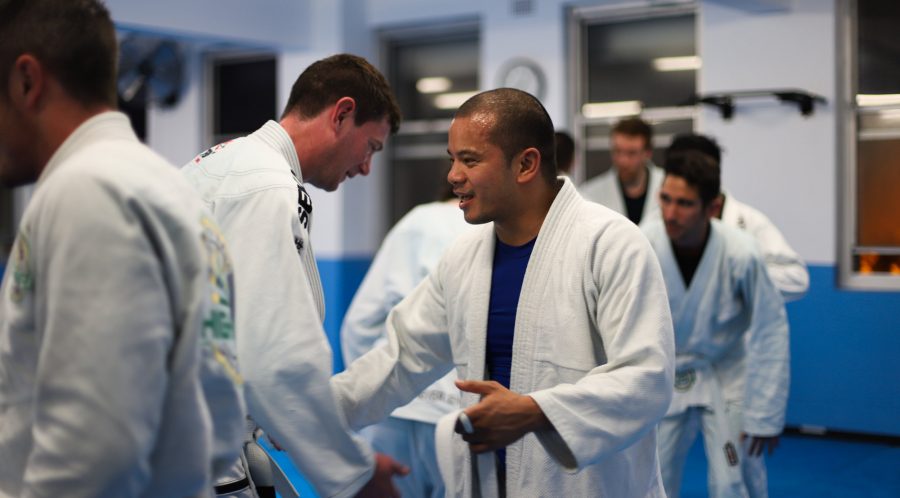 Once upon a time there was a middle aged man called Perry. Perry loved all the good things that life has to offer a middle aged man. He worked hard, played hard, and enjoyed looking good while doing it.

To ensure this was actually the case, Perry would attend the gym regularly. He never actually loved working out, and would prefer doing other more fun things. But he always dug the feeling of accomplishment he’d get after doing it, and God forbid he got fat, so that’s what kept him going.

One day, Perry’s friend Terry insisted that he join him at a free trial of a class in karate. It wasn’t really karate but some martial art called jiu jitsu that was done in pyjamas. Perry wasn’t overly keen, but went anyway just to shut his mate up once and for all.

They arrived at Higher Jiu Jitsu. From the outset, everyone was friendly, and actually quite normal, even while in their PJs. They bowed in for class, and went through a series of warm ups. Perry had never moved or seen people move in these ways before, but funnily enough he learned how to do them too. And strangely enough, they made his body feel long and loose.

The class then proceeded into the technique phase. It was strange getting so close to strangers for the first minute or so, but before he even realised, Perry was deep in the hole learning how to strangle someone cold using only their two collars.

Soon later, the class was over, and Perry was supposed to go home. Only he didn’t want to. He wanted to feel more mechanics, meet some more new faces, and enjoy the feeling of being on the mats. “It’s so liberating” he thought. He’d never been so focused on anything for so long, in a long long time.

So he signed up then and there. He even bought a set of pyjamas of his own. Gis they call them, pronounced gh-ee. Since that moment forward, Perry has never looked back.

He still works hard, and plays hard. And he looks good doing it. But he does it while learning the skills of self defence, hanging out with his new friends, and having so much fun.

Gone are the days when he would work out for the sake of looking good. He still goes to the gym, but now it’s to get stronger, and more connected for jiu jitsu. Jiu jitsu has given him an outlet to remain happy, healthy, and forever evolving.

You can be like Perry too. Feel tired of your gym routine? Dying to break the work/home cycle? Well then it’s time to do Higher Jiu Jitsu.

We’ll take care of you, you’ll learn, and you’ll have fun. Guaranteed.