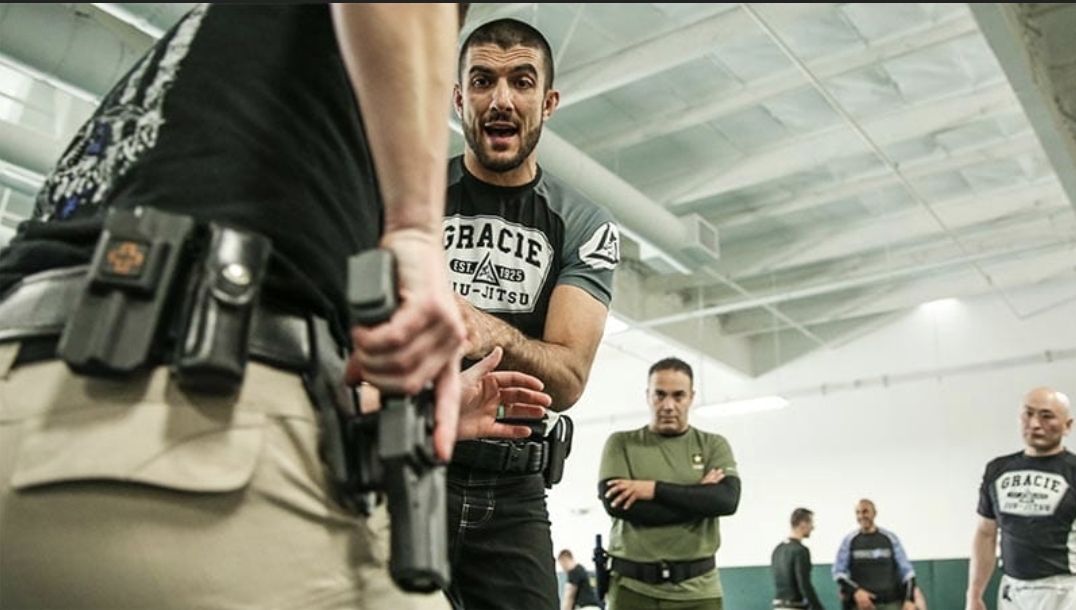 This week, HBO aired a story on the Gracie Academy’s GST program for law enforcement in the US. The 17 minute video highlights one main problem of policing- not enough training to do their job effectively. Officers with limited training and resources are more likely to feel threatened or angry and use excessive force. Brazilian Jiu Jitsu offers an extremely effective way to control suspects without striking. It can also be trained safely. So why aren’t Australian police training jiu jitsu?

It’s not a simple answer, and we’re still trying to get more information. We’ve spoken with local Sydney officers and done some research, however, this is a civilian perspective.

In the video, Marietta Police Department in Georgia implemented mandatory Jiu Jitsu for new officers. A year later, they had a 48% reduction in officer injuries, 53% reduction in suspect injuries and saved $70,000 in workers compensation claims. This real world data shows that jiu jitsu can help repair the public opinion of police.

This news is not surprising to the Jiu Jitsu community – it’s an obvious result. If an officer doesn’t have hands-on skills, they have to resort to higher levels of force for their safety. This results in needless injuries and escalation during arrest scenarios. Gracie Jiu Jitsu is also not new, having been “introduced” to the world in 1993 with UFC1. Soon after the US Army and Navy SEALS added brazilian Jiu Jitsu to their training, among others.

What kind of hands-on training do Australian Police officers receive?

Police Defensive Tactics or DEFTAC details aren’t made public. However, we did find this video from 2013 demonstrating a few of the defensive techniques. After a few check drills, an officer does do a hasty trap & roll from the bottom mount position (5:40)! So there is a tiny piece of jiu jitsu training, but is that the extent of it?

Officers are only allowed to use approved techniques to deal with violence. From the looks of this video, their tool belt is pretty limited. A few strikes and a baton, OC Spray and a TASER. And if they don’t work? Improvise.

Police officers in New South Wales (and presumably other states) get around 4 hours of annual DEFTAC training. In light of Covid risks, this training is even more scarce. In a job where you have to be hands-on with people every day, shouldn’t this be a priority?

A Sydney Morning Herald Article in 2019 detailed the new database for police reporting use of force. The most notable point of the article was the graph below. The top reported reason for use of force was assault/resisting an officer. No surprise there. However, #2 is Mental Health! Assuming the mental health category means nonviolent, this is surprising! (Also Offensive Language is a bit surprising)

NSW Police drew their Tasers almost 3000 times in the course of duty over the past five years, according to internal police records and, in more than 1000 of these cases, officers logged a mental-health issue.

When a police officer’s only “approved” non lethal tools are to strike, OC Spray and taser mentally ill people, we have a problem. Jiu Jitsu is perfectly suited to safely control those with mental health problems. If someone with severe mental illness has a breakdown, and is tasered and arrested, what will be their reaction to police the next time?

In recent years, a few recorded incidents of excessive force during arrests went viral . For example, Police repeatedly taser Indigenous man in inner Sydney and Sydney police officer under investigation after slamming Indigenous boy face-first on to pavement. These two incidents in particular became famous for all the wrong reasons.

We don’t know the full story, but surely there is room for improvement. Whether malicious intent or not, tasering a non-violent suspect is scary. Seeing an officer yell “get on the ground!” when the suspect is already on the ground, shows a severe training deficit as well.

What happens when untrained police watch UFC or youtube videos.

This shocking video is likely to give jiu jitsu a bad name in the eyes of the un-trained: WA Officer facing disciplinary action after choking man during arrest

This officer was clearly not a Gracie jiu jitsu practitioner! This was incredibly malicious. I reckon this officer learned this from watching MMA or some youtube videos. The key that makes Jiu jitsu so effective is the ability to train constantly and safely. This means knowing exactly how chokes work, the limits, their consequences and the thousands of alternative techniques. Just like a firearm, a choke can be a lethal weapon. It must be fully understood and used only when required. However, a choke can be an amazing non-lethal tool when used correctly.

Time: Of the police officers I Interviewed in Sydney, most patrol units work a 12hour shift. That’s a long day for any job. On top of that, many live far away from the city. An officer at Redfern Police Station estimated over 50% of the station live in Wollongong or on the Central coast. Adding a 2 hour commute to a 12 hour shift is exhausting just thinking about it. When would police find time to train anyway? Would their shift end at a convenient time for a local jiu jitsu class?

Liability / red tape: Officer Safety is always a priority. Perhaps some of the decision makers think that officers might become injured while training? Regardless, everything must be approved by a tactics officer. This red-tape and approval could take too long.

Police are Human Too

We ask a tremendous amount from police officers, and we should. They should be the best of the best, and have the tools and resources to back them up. It has to be incredibly hard to be an authority figure with deadly force, seeing the worst of humanity every – single – day. Years and years of dealing with criminals, chaos and violence will change anyone’s outlook on life.

Then we ask police to be a friendly face in the community, and to be as gentle and patient as possible when handling difficult people. It’s a high demand for anyone’s mental health.

Higher Jiu Jitsu is located at the prestigious PCYC City of Sydney.

We offer high quality Gracie Jiu Jitsu self defence instruction for everyday people. We work with the Pedro Sauer Gracie Jiu jitsu Curriculum which deals with common situations of conflict that police can find themselves in.

We focus on the understanding of leverage which allows for control to be possible without excessive force. This is opposed to an athletic pursuit of performance in the sport of grappling which seeks victory through a points system. This is a major difference which needs to be stressed.

We have different classes to suit various levels of experience. Coaches in each class are highly trained, and capable teachers who are there to demonstrate, and guide you, and help you learn.

Police officers do not need to have any prior knowledge, or training in grappling or other martial arts to join. Classes will involve a warm up, study of technique, and practice of application with fellow willing students.

A major advantage for training at Higher Jiu Jitsu is access to the student body. This school is filled with curious, enthusiastic students who help eachother and support one another throughout the learning process.

In addition to regular classes, Higher Jiu Jitsu offers special seminars which can work on specifics of policing and working with others. Please enquire within for further details on this.

For far too long police officers have been left guessing and hoping for the best in what is a very difficult, and dangerous job.

It is imperative that our officers do their bit and get the necessary training in to avoid unnecessary conflict and rebuild the relationship between police and public.

We are happy to offer this alternative solution, and while there is lots of ways to go, class by class, and officer by officer we can make a difference and make things better.

If you are a police officer and would like to train at a Higher Jiu Jitsu facility, please get in touch! We’d love to have you.

Jiu Jitsu is Self Defence