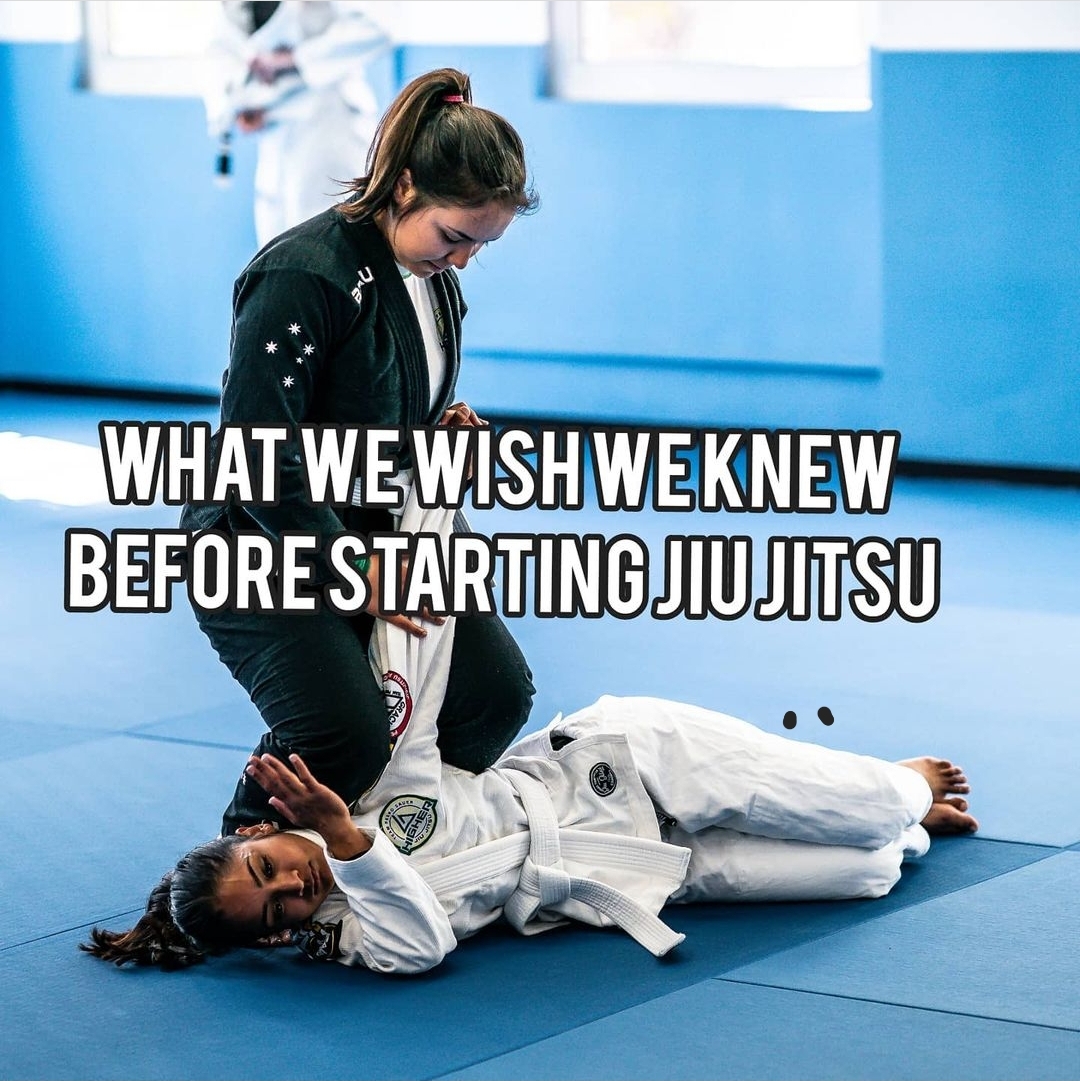 We did a survey asking our students what they wish they knew before starting jiu jitsu.

Matty and I come together to record a discussion based around these responses.

Alex Shane
I wish I knew not all schools are the same, the difference between ones that are mainly competition based.
The water trick to breathe and relax.
Just go with it and don’t fight it so hard you gas yourself out and don’t retain anything

Simone Goldsmith
How to tie up your pants correctly so they don’t fall down during class!!!
And belt!!

Dan Mark
i remember wishing there was some easy dictionary (or pictionary) to be like “this is a what an arm bar is, this is a kimura is, this is a triangle, this is a darce” so i could understand what was happening in class and rolls.
i also found that it was much easier to understand why something like “escape from RNC” was useful rather than something like butterfly guard or half-guard, because I didn’t need any base knowledge to see how it could come in handy.

That you’re not wasting someone’s time if you are paired with someone new and they are a higher belt. I get this feedback a lot from new shy people but we actually take pleasure in teaching each other and people learn more from teaching sometimes.

Also don’t put pressure on yourself to learn everything and pick up every detail the first time you see something (and feel overwhelmed) because it takes time and the syllabus is iterative so you will see it again. If something feels too hard or forceful or you’re using too much muscle or effort you’re probably doing it wrong and ask someone about it – or as I like to put it ‘aim to be as lazy as possible’ (ok maybe efficient is the better word..)

Nick Avery
Your measure of “ability” or “success” is not how many people you tapped that week.

Taran Fazio
It’s not just about winning but more rather learning.

Jem Ortseid
Dont forget the basic, perfect one technique, and go with the flow. Learn from each other and stop hurting your team mates.. we grow together and learn together.
I have lots of injury when i was whitebelt, too aggressive and no control.
You can learn to anyone even whitebelts. Thanks sir this is my second home in juijitsu

Raelene Loong
Trust the process! Also, a huge pre-requisite that helped me was mastering the basic movements when I first started (morning zoom session team represent), and understanding how to be aware of your body (the black hole stuff we did really helped me in this sense!)

Also, be present on the mats to learn not fight. I think the one thing HJJ fosters well is this attitude that we’re here to learn and practise and play, not fight.

Andrew Nerlich
Focus on small victories at the beginning,e.g. last time he tapped me twice, this time only once. He can’t get me with that armbar any more and had to switch to a choke.

Shivayan Bhattacharjee
If you’re not sure what to do in a particular situation, don’t fall back on using strength.

Novan Pradhika Sachrudi
In training, tapping early and often is respected and commendable.

Isabella Marie Polines
Don’t just crank on submissions, and especially when drilling go nice and slow and take care of your training partner. If your mechanics are right they’ll be caught and the submission should be there no matter what

Matt Jackson
Don’t try to do stuff fast. Focus on the purity of each movement and improving that each time you train
Trust the coaches to measure how well you’re doing, because they’re measuring your progress in the context of your own development path – find encouragement in that, instead of self comparing to others, which won’t lead to productive outcomes
Also knowing the appropriate response to when Johnny and Matty try and involve you in their jokes, would be appreciated

Brad Hampson
I wish I knew how much my perspective would actually change as a result of training Jiu Jitsu.

Benjamin Marks
A basic overview of the positional hierarchy, when your priority should be looking to advance position, attack, defend. Explaining what the tap is, how to make it obvious, and you can tap for any reason, it doesn’t have to be in a “submission.”

I also think having short trimmed nails should be explained to everyone on the very first day, some people go a few months before someone takes them aside and asks them to cut their nails.

Victor Hugo Beltrame
How to tie up your belt, still not knowing it. And how to fall properly

Danny Willmot
I wish I had been told about it sooner! :)

You can find the podcast episode below: