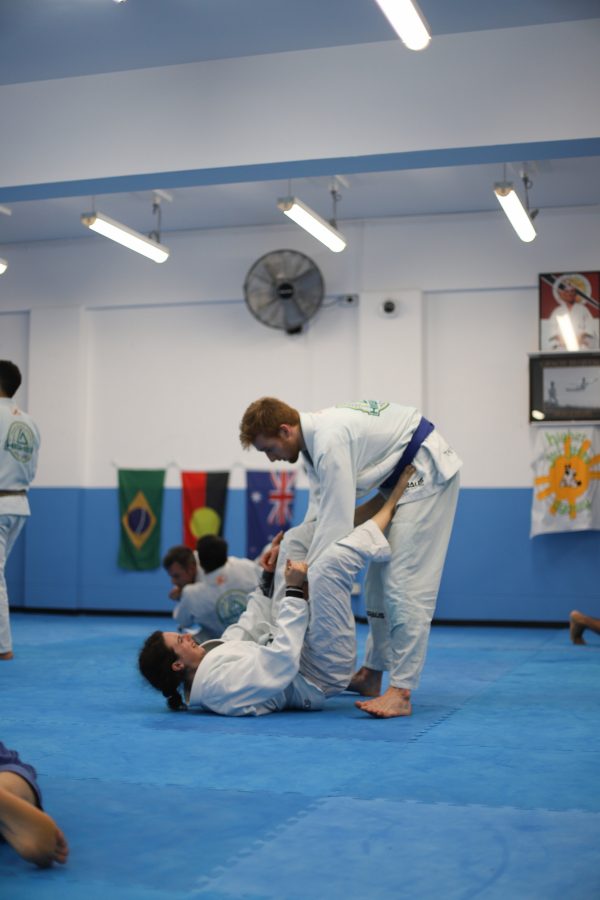 My first ever competition came not three months into my jiu jitsu learning. I was encouraged to enter and the thought of going up against someone else was cool, so I did it.

I was winning my second match on points, even though I had no idea what was happening. Then an armbar came on hard. I had no clue how to escape so I gritted my teeth and hoped for the best. My elbow torqued, I heard a bunch of cracks, but I got it out. I ended up winning the match, and also not being able to move my arm for at least a few days.

I lost the next match of that tournament, perhaps the arm had something to do with it. Nevertheless, it was the biggest adrenaline dump I’d ever experienced, and I was in love. After this, I ramped up my training, scheduled out my strength and conditioning programs, and was already dreaming about the trip to the mecca of jiu jitsu, Rio de Janeiro.

I wanted to be a dominant Aussie champion that tore up on the world stage too. It’s what fuelled my life’s choices for the next few years. I won some comps, lost others, and I was determined to reach my goals regardless.

After my planned worldwide jiu jitsu dominance, I’d already concocted my foray into the mixed martial arts. Only then would I start to consider striking. I’d never thought about anyone punching me in the face during a jiu jitsu roll. I thought it was only done with grips, and points, and podiums.

To Win or to Survive?

‘Jiu jitsu is only a grappling art’, or so I thought. My training wasn’t a means of learning self defence, or how to fight in a real encounter, but to win a tournament.

At this stage I assumed Gracie and Brazilian Jiu Jitsu were the same thing with a different name, and I thought you’re dreaming if you could win a real fight only with jiu jitsu. The Gracies were always the other guys we were going up against, and so I never considered learning more about their system.

It wasn’t until I seriously injured my shoulder that things started to shift. My jiu jitsu world had been turned upside down. It was a monumental tear that left me with no cartilage in one joint, and it meant that I could no longer train like an athlete.

It wasn’t because I didn’t want to, but because I couldn’t. I didn’t want to stop competing, and training hard, pushing myself, and striving for better performance. I fought it. I tried valiantly to get back to where I was, smashing through like I used to.

But it just wasn’t working. Arthritis would tell me in no uncertain terms that it was not to be messed with. Just as the surgeon said, if I wasn’t careful I’d be back to him in no time.

Something Had to Change.

But this time I clearly understood the risk of injury, I’d experienced the impact, and I was determined to avoid a repeat.

So I started again.

I wanted to find a way of doing jiu jitsu that allowed me to work around my injury, kept me safe, ensured I was still effective, and enjoying being on the mats.

It was a tall order. It’s way easier doing what you know, with what you have. But I also knew my ability to live the jiu jitsu lifestyle was riding on doing things different. And with such stakes at play, it was a challenge I wasn’t backing down from.

Jiu Jitsu for a Lifetime

“When the student is ready the teacher will appear.”

Funnily enough this was around the time I encountered the teachers that embodied exactly what I longed to know.

First it was Steve Maxwell who made a random cameo in our academy one year.

He came in, and opened my eyes to the Helio Gracie Jiu Jitsu curriculum.  Class by class, he would demonstrate the techniques of Gracie Jiu Jitsu and stress the importance of protecting yourself in training.

He’d share stories of fights in Philly and old Gracie Challenges and for the first time ever I was doing jiu jitsu as a complete system of self defence.

He took me on his Aussie seminar tour with him, and I was immersed in his methods of mobility and strength training, and how to be a healthy, lean, ripped old guy like he is. We even conjured up the idea of ‘Jiu Jitsu for a Lifetime’ together, and it’s since become a seminar being delivered all around the world.

During a particular seminar in Melbourne, I met this one big, bald Greek fella. He had an impeccable beard, and called me a ‘malaka’ twice in 2 minutes. We’ve been mates ever since. Phil was a black belt, and clearly obsessed with jiu jitsu, just like me. Only difference was he had more serious skills, and a slick understanding of the mechanics behind it too.

And so a couple months later, when Professor Pedro Sauer was coming to Sydney it was a no brainer that I was going to attend. Looking back it was this moment that consolidated my understanding of what Gracie Jiu Jitsu really is.

The Importance of Self Defence

Firstly, it is all about self defence. Using ju jitsu as a means to protect yourself in any situation is the inherent meaning of jiu jitsu, and the martial arts.

In Gracie Jiu Jitsu you are not playing one style then the other. You don’t think about points and medals sometimes, and MMA rules the next. When you are practicing martial arts you always need to consider how to defend yourself.

This doesn’t mean Gracie Jiu Jitsu practitioners don’t like to compete, or playfully roll. On the contrary, we do this while thinking about an actual fight. Two birds with one stone. For example, when you show the Professor a technique, he’ll judge it by it’s efficacy to be done with leverage, and how much it keeps you safe against any style of opposition.

This is profound. Rather than having one game for competition, and another for MMA, you do jiu jitsu which is all encompassing. For if the berimbolo position would get you killed on the street, why then devote attention to it in the competition realm? Sure it may trick the opposition, but so will another type of guard game that keeps you away from an opponent’s strikes and ill intentions.

The goal is to have a style of jiu jitsu that you can use anywhere and everywhere, with minimal adjustments. In this way you’re effective in the competition realm, safe on the street, and able to use jiu jitsu as a vehicle for self improvement in life.

If you do jiu jitsu in the way it was intended by the Grandmaster Helio Gracie, you can continue the practice right till the end, just like he did.

Gracie Jiu Jitsu can be practiced as a sustainable martial art for life because you are always looking to find leverage in every situation. The way you do it is with your bones. Your muscles and your athleticism will expire. There is no doubt about this. No matter how much time you spend in the gym, no matter how much protein you eat per kilo of bodyweight, senescence is a real process and you are currently going through it. You can manage it, sure. But you can’t stop it.

Instead, prepare for those days now by focusing on technique, first and foremost. When you focus on learning the technique, the leverage points will become more obvious to you and you’ll become accustomed to finding it more regularly.

When a strong person comes across a problem in his training, he can grit his teeth and force through it. This doesn’t work as well when you’re older, injured, tired, and sore. So prepare for those times now by improving your technique. That way when you do get older you are focused on leverage and not muscular force.

This is Gracie Jiu Jitsu

It’s been about 3 years since I’ve made the switch.

Now, there’s no going back. I’ve drank the cool aide.

Gracie Jiu Jitsu is what fuels my life and what inspires me to keep getting better and better. It’s because I know this is a journey till the end that I’m able to ride with the ups and downs that are inherently part of it.

It’s how I keep myself healthy, it’s how I socialise, how I contemplate my problems. It’s my anti depressant and my beacon of fun in this crazy yet beautiful world.

Beyond the medals and the titles, the path of jiu jitsu is one for life, “for there is never so much joy in the tavern than on the road thereto.”

The Jiu Jitsu Long Game: Here’s How to Play