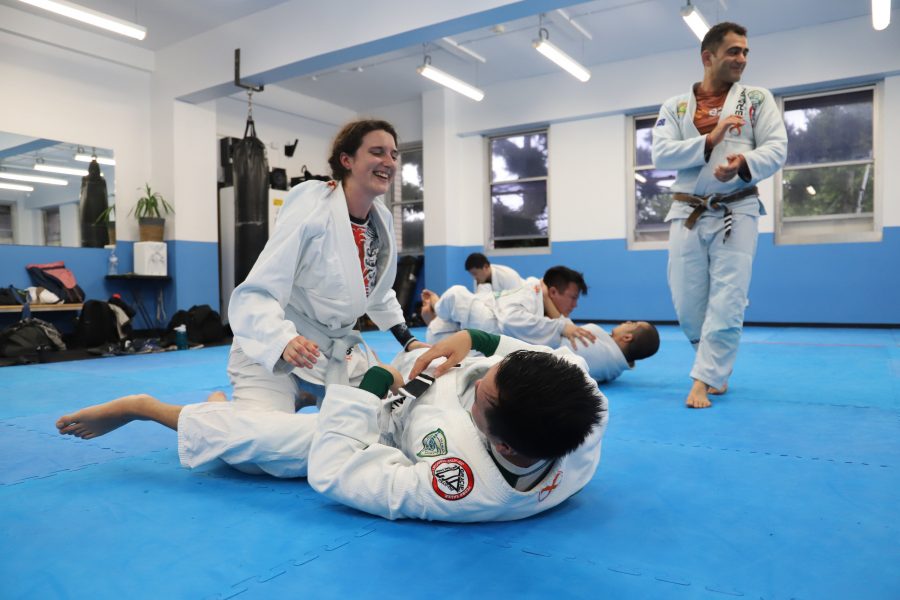 You show up to class, and you do your best to apply yourself to the task at hand.

In a Higher Jiu Jitsu class, you learn to focus on your breath and tune in with the feeling and movement of your own body. You repeat techniques, and each repetition is a different story. The goal is to refine, and to learn.

You can then take those techniques, and apply them with someone who is also trying techniques. You look after your opponent, and you try to roll with finesse and maximum efficiency. Initially you get tapped regularly. At some point in the journey you get to make others do the tapping.

Either way, the goal is to learn.

Yes, you’re acquiring the skills of self defence, and you’re doing your best to get better.

The short game is to get frustrated that you’re not remembering, or not understanding, as fast as you should be. The ‘should be’ is an imaginary figure running toward a non existent finish line. This lesson is but one of so many more to come your way.

When you play the long game, there isn’t a finish line. No end in sight. That isn’t a punishment, but a just reward for being a student of this martial art.

The long game comes with it’s own rules of play.

First things first, do not get injured.

In the long game, letting your limbs snap, and your neck crank isn’t an intelligent thing to do because you’ll need those joints fresh and healthy to train till the end. When you let bones break you lose many points. Points come in years you’re able to be on the mats.

It’s smarter to tap when you need to, and reset again, ready to learn from your mistake and not get caught with it for next time.

Accidents also lose points in the long game. Sure the intention of an accident is lacking, but the act still stands. Your mis co-ordination, and your overenthusiasm was the cause, and sorry doesn’t fix anything.

You must respect your partner, yourself, and the art of Gracie Jiu Jitsu self defence. No injuries. Sure, some discomfort in and amongst the process is ok. But as Rocky said, “no pain”.

Next, you need to keep it fun.

To learn, and to have fun are interdependent entities. Without one you won’t get the other.

Keep your training to the level that you’re not having to dig THAT deep in order to survive. It’s not OK to always be crippled with soreness, and feel like you’re dying on the mats 30 times per night 6 days per week. It gets old very quick.

Have willpower in bundles by training in a way that pulls you to go back. You’re going to jiu jitsu- yay! You’re excited, and it’s a welcome release from your days’ woes.

The rage of our culture is the hustle. If you’re not drowning then you’re not in deep enough. So we load and load and load. How strong is this camel’s back? Stress can come in many forms and you start to have a wide array of problems when it becomes the norm.

An overreliance on self discipline, & willpower in the push for success is a surefire way to reach game over in this game. When you think of dedication it doesn’t have to be something of excessive effort, and obsessive attention.

This way of force cannot be sustained forever. You can’t push yourself around, and demand things of yourself, and expect it to continue on an ongoing basis. It’s tiring. Eventually you will burn out. Burn out comes in the form of injury, an unwillingness to make the time, and a general disdain for what you do.

You want to avoid this at all costs.

Remember, you choose the Long Game.

The short game is also fun and very tempting. It involves plenty of hard rounds, and lots of sacrifice, and glory in the form of victory. Winning is awesome. Being the champion sounds great, your hard work pays off, and you feel like $1million.

And yet this is only the battle. You’re also trying to survive the war.

Most definitely you can compete and play the long game. Feel free to embrace the chaos for as long as you want to embrace it. But have levels. It’s when chaos is the only option that eventually you get tired, you get injuries, others become better at the chaos, and you lose the long game.

Over the years, we’ll see how the leaders of the long game will eventually come to the fore. The investments in the long game won’t always come in medals around your neck, but degrees on the black belts, and red and black belts, and coral belts. Those belts represent the years of hard work, and commitment, and sacrifice spent on the mats with Gracie Jiu Jitsu.

As a lover of jiu jitsu, it’s the game you’d want to play most of all.

When There’s No Choice But to Change
Scroll to top